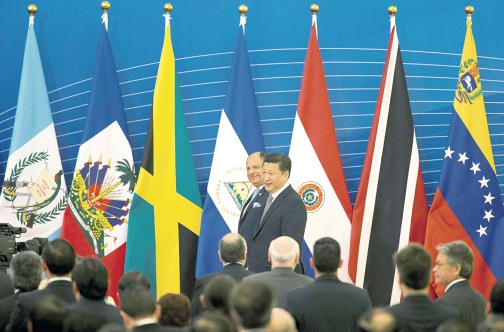 The New Coast: Recently a solemn promise was broken. A few of us halted all travel plans until we were convinced that the government had the chikungunya virus under control. However, breast cancer took a dear family officer after 30-plus years in public service.

Despite the earlier concerns, many of us went and showed our final respect for fallen hero who also made it possible for countless family members who now have a career in law enforcement. After the flight landed, it was time to both reflect, and enjoy our heritage and the ancestors land.

Traveling the coastline, with the ocean dangerously few feet from the vehicle, while staring at beautiful homes tucked in hillsides, the temptation to pullover for a quick swim, or capture the sunset, and walk barefoot from the cold left behind emerged.

However, a once simple pastime and custom for natives from a hot sunny day or a weekend with families to prime free beach areas to relax, is apparently becoming very difficult and just an idea.

The high criminal elements that are sometimes a deterrent has now been taken over by: segregation, isolation and the fight equality now seems more dangerous.

Even vacant lots that should have been designated as historic land and preserved are either leased or bought by foreign private investors. Home prices are extremely high and few older structures that could use an upgrade, owned by the less fortunate people passed on from their ancestors, and dating back to British rule, many found themselves restricted to move freely.

As the mega-building rises, green land and trees are diminishing, thus contributing to the record high temperatures, while ignoring the environmental impact.

Many of the local people I spoke with are not against investments or people who do not look them; and they should be respected and protected, but these residences would like to see a balance. They work hard and played by the rules, but finding it more difficult to get ahead and like-stability for everyone; especially ones without a voice to survive.

The gentrification in disguise is a global trend, creating social stratification sold as transformation. Sure, a few job are created by new stores, and hotels. However, some working conditions often look like a previous century, working in hazardous conditions for extremely low wages, unable to purchase a small home in the communities they are serving.

What is the trade-off, and where are the unions to balance labour and human rights? The region is now dominated with massive imports. Locally grown products have dwindled to small corners like news racks covered with international news clips while local customs and identity get lost.

Analyzing the region’s plight from the outside is difficult. Who are the investment banks in disguise, as famous faces who claim they are in love with the region while commercialization threatens native culture. Obviously an incredible lack of knowledge or accountability about who are the human piñata lining their pockets. What is troubling, it seems an iPhone, Facebook, and YouTube appear to be more important to some, while the sand is being swept from under their feet.

This new push in the Caribbean is not an overnight success for some. China started its diplomatic engagements in the early 1970s, or what can be called their blueprint. For Jamaica, the voyage started under former Prime Minister, P.J. Patterson on a high-level visit in 1998, when Jamaica opened an embassy in Beijing. Later, the Caribbean Economic Trade Cooperation was forged. In 2005, Jamaica hosted the first China-Caribbean trade fair. Other Caribbean countries have seen an explosion in key areas.

A few months ago, I wrote about China’s penetration into the Caribbean markets for anyone who has access to a red carpet. The modernization of technology and infrastructures brought to the region should not be an economic long-term sentence for some.

This new colonization with local hidden alliances has not lifted the poor from poverty. Many still depend on handouts for survival while the middle class struggles and remittance from family members. The lack of transparency, accountability and ignorance continue to slow growth.

One report noted that China uses its financial influence and CARICOM as its umpire to expand. Several projects, from medical centers to stadiums in St Lucia, Grenada, Dominica, and Jamaica, and others with cheap loans has some positive effects, but who are the real long-term beneficiaries?

McKinley & Company, a global consultant firm that operated in more than 40 countries, once noted that several companies have failed, especially in the energy industry, due to cheap imports from China over the past ten years. To the Chinese credit, education is mandatory.

They have tremendous control over the value of their currency in spite of questionable human rights issues. While the priceless seaports and other infrastructures are being sold, leaders should at least learn some of their business strategies, and even negotiate an energy efficiency deal to reduce the dependence on fossil fuel, especially in Jamaica where an average customer pays about 42 cents per kilowatt-hour. Many factories should be mandated to clean up the air, but that will hit the elite who run the country.

Selling Our Souls: While many Africans sold slaves, they did not invent slavery. Today, the selling of native land is a rebirth of such dark period. The Europeans and others turn the plight of others into major businesses. Having few natives at the table today does not make it more acceptable.

In November 1927, Marcus Garvey was deported from the US. He fought for self-governance and despite push-back even from black leaders such as W.E.B. DuBois, who once described Garvey as “a little, fat black man; ugly, but with intelligent eyes and a big head.” The region could use him today as an ambassador. Patriotism cannot only be in the music that comes out of the region.

This paradigm shift along these blue waters is troubling. Sunday, November 17, 2014, opened the world to an issue kept off air when CNN aired Anthony Bourdain’s Part Unknown. To some, it was uncomfortable, but viewers saw that Jamaica is not all about reported violence, marijuana, and a relaxed attitude.

The culture is going through a silent erosion where few rich individuals and companies are building resorts that not even the locals can afford to visit. “Imagine prohibiting an American from a public park,” as one vendor’s legal struggle put it to keep one of the last free beach from development.

When Miss Jamaica Kaci Fennell was not selected as the 2015 Miss Universe, many mobilized in the street, online and voiced their displeasure. The same emphasis on these issues as to the plight of their nation — access to where one can live or swim free — is needed. As many questioned Kaci’s skin colour to represent Jamaica, it only underscored the argument that a few are still stuck in an identity crisis to see even more dire issues

Where is the local tourist board?

Furthermore, few are willing to sell their souls and local government leaders appear muted. When personal financial gains ruin an entire community, conflict is inevitable. With high unemployment and poverty, and division, the criminal enterprise thrives and hopeless youths become radicalized, not necessarily from religious ideology, but stemming from polarization, isolation and the lack of opportunity.

New Charity Economy: Today, it seems the region has more charity organizations than small businesses to help the youths. However, not all charities are bad. In the US, one in six receives some type of food support and many school students go hungry each day.

Philanthropist Jeff Levitetz recently funded several schools in Jamaica’s rural outpost “In Honor of his 96 year old Grandpa Charlie”, working with Coconut Creek’s nonprofit Food for the Poor. The charity aims to build or upgrade 50 schools on the island. Jeff’s grandfather has a personal love and affection for the Jamaican culture.

In addition, US$166 million is pledged to Jamaica to addresses climate change. The irony is that the coastlines are being ripped apart by development, causing severe climate issue. Furthermore, despite millions donated, some charities do not serve the desired purpose, and the lack proper oversight leads to actions where donations are used to further personal needs.

When politics becomes more important than higher education that only a few can afford, it only creates a new generation of ignorance. Throughout local districts, several primary and high schools still lack a good library and other educational resources to properly educate the next generation. Yes! You can continue to blame slavery, and the lack of reparations. The arguments remain valid, and add several economic downward slopes since independence to the debate.

Even 200 years ago, education was a necessity. Between 1835-1842, the region had a slave fund shortly after emancipation. While many in the region and elsewhere were denied access to education in that same period, the British government voted 30,000 pounds per annum towards the education of former slaves. The fund ended around 1845, as studies have shown for many of the British West Indies colonies. It played a pivotal part in training teachers, and building schoolhouses. It was called the Negro Educational Fund.

As 200 years ago, very little funds came from the West Indian governments. The once colonial power seemed to have more interest in educating former slaves than many leaders today to analyze global trends and make decisions.

The disappearance of good governance some could learn something from 200 years ago. It seems handouts have become the normal way for survival for some, while the communities need a sustainable long-term foundation. New charities and awards checks are not capitalism.

New Approach: Few economies have rebounded since the 2008 financial economic collapse. The Caribbean still has an economic virus. The unemployment rate, inflation currency devaluation, and crime remain a problem. Despite these issues, the people are welcoming, but they must not be fooled in a misguided perception that the few millionaires who own these shores are totally in love with the island’s relaxed vibes, food, and people.

Love does not hurt others. When Ian Fleming (and James Bond) fell in love with Jamaica in the late 1950s, conflicts were not about access to one’s own land.

The few who have the media are skilled at making noticeable linguistic shifts, while masking an urgent need to resolve the dangerous ideological faults even within their party. While it looks like capitalism on the coasts and inland; however, if it is one-sided, it defeats capitalism as a driving force to end poverty and inequality.

Today, we are left wondering how young police officers will be able to afford a home in area they will patrol to protect mega properties and address the untold stories, where hard drugs and young girls who struggle to find employment become nightclub dancers for a few dollars, controlled by pimps who force them into prostitution, sexually abused and exploited. They are not beach beauties that stroll the sand, they are victims that are often overlooked throughout the region.

Modernization is important; however, it should not take a nation back centuries, where only the rich and famous get to rewrite.

As Burning Spear once said in a song, “My island don’t sell out.”

This site uses Akismet to reduce spam. Learn how your comment data is processed.